The PDR3500 is basically a quantar in a portable format using a PA from a Spectra mid power radio. The basic service manual has a diagram of the backplane and glue circuits that tie this all together. It's very interesting to read as it explains quite a bit more of how the ID resistors and SPI bus works. If you're hacking quantar's, it's a must read.

Here are part numbers and what the correspond to.

The -48v supplies are easy to see as they have a side to side DC breaker style switch. The Motorola/Onan column refers to the manufacturer of the PS. Many people rag on the Onan power supplies, but I've not had one fail in service yet. The Onan do have a heat activated fan, whereas the Motorola run continuously. This can be good for base use or in the lab, as the base station will not make noise unless it's keyed down for some time. 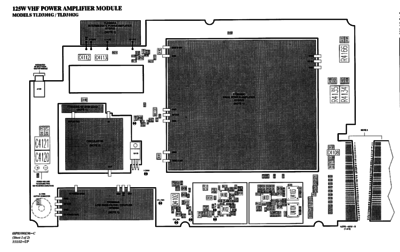