Difference between revisions of "Motorola R2001D"

This is about the Motorola R2001 series of test equipment from the earl/mid 1980's.

There were several A/B/C units in the 2001 series before the D came out in 1984. The earl units were offered for sale beginning in 1980, and lack some of the features of the later units. I'm not sure what they lack other than the modularity and the frequency tuning control of the D series. 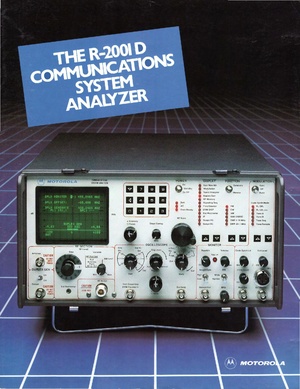 At some later date (1986?) the other options were introduced:

I call this board options as through out the life of the 2001, different boards were produced. The A12 and A13 slots can take any option board, but some combos require the GPIB card.

There's a bunch of manual all over the net, some I've scanned, others from other people. Some scans are better than others, I've OCR'd and cleaned up what I've found to the best of my abilities.

42 MiB, Service manual I scanned from a high quality copy of the OEM manual that was included with the R2008D/HS I bought in 2008.

Operators Manual for Cell Test set on the 2008C series

The below firmware images have been read off the PROMs inside the respective modules. I'm not sure what's what, so I've broken it out by the monitor it came from. Any additions would be helpful.

The original extender cards are not available from Motorola. They were flexible and you were able to lay the test board on top of the unit to trouble shoot it. The card edge connectors are .1" spacing and were manufactured by Sullins Microplastics. I've had good success with after market flexible cards from eBay/china.

The antenna input is designed to take a 1/8 amp axial Picofuse made by Littlefuse - 0251.125MXL

This was a little Easter Egg left in the system. One can get a spectrum analyzer and tracking generator function in the spectrum mode. This allows the use of a return loss bridge to measure return loss.

Note this is not calibrated, but it will work. There are limits to the general poor preformance of the built in spectrum analyzer.

Based on a note it's possible to use an external scope with the unit if the internal CRT dies.

I took the following pics of a R2005D/HS I repaired

A-2 Scope Amplifier Board

A-9 Scope DVM Control Board

A-10 Audio Synthesizer Board

A-11 Processor Interface Board

Restoring the CRT on a Motorola R2001