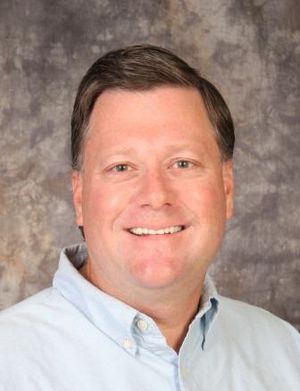 Note the only interactions I've had with him was inquiring about the Motorola ION radio, which was overpriced from him and required me to use his radiocentral agency; I wanted my own agency so that I would have control over it. The other time was inquiring about his WAVE product, where he wouldn't discuss it unless via phone and provided no details on it, nor pricing.

I just assumed he was a bad salesman or at worst a guy trying to bottom feed in the amateur market since he can't hack it in the commercial market. Let's be honest, hams are a hard market to serve and no dealer is going to make much money selling one or two radios.

Fast Forward till June 4, 2022 and he sends me some messages about defaming him on some forum. He claims this harassment has "gotten to a point where it might affect your career."

So Ken Bryant may be insane, and at least epitomizes the "Boomer Ham". He's got a poor grasp on technology and an even poorer grasp on human interaction. I suspect this is why I saw nothing on his WAVE soultion as he can't code it, and lacks the technical prowess to hire it out.

Looks like he's an admitted whacker, radio pirate and former convicted felon too!.

"that's how the graham cracker crumbles"

Read theses top to bottom. This is insane! 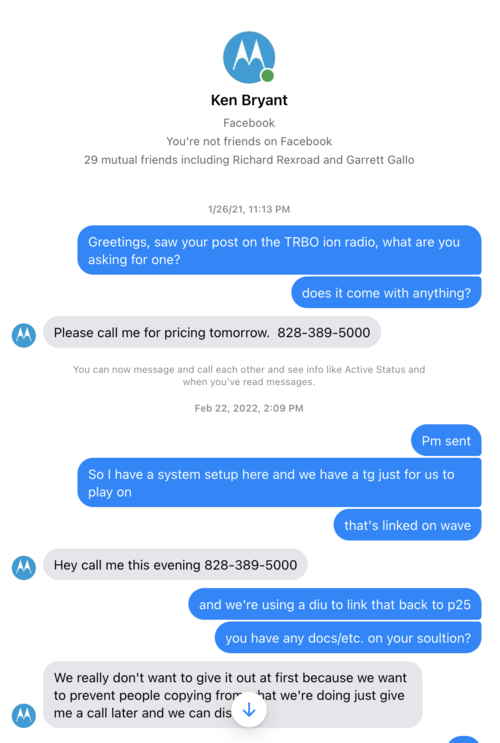 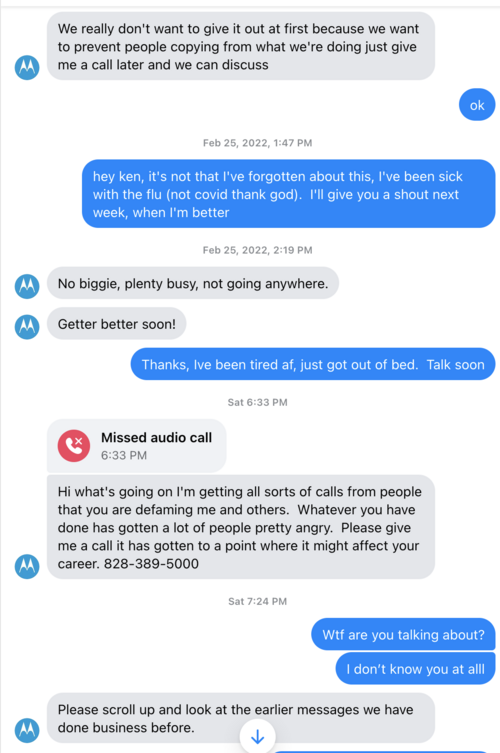 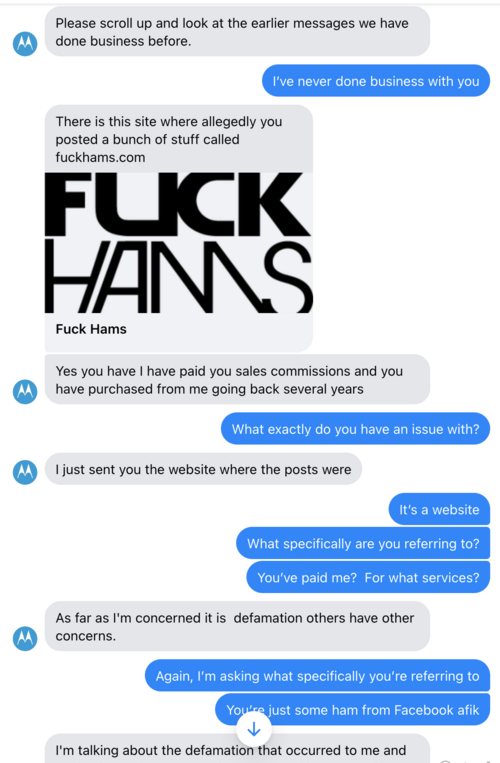 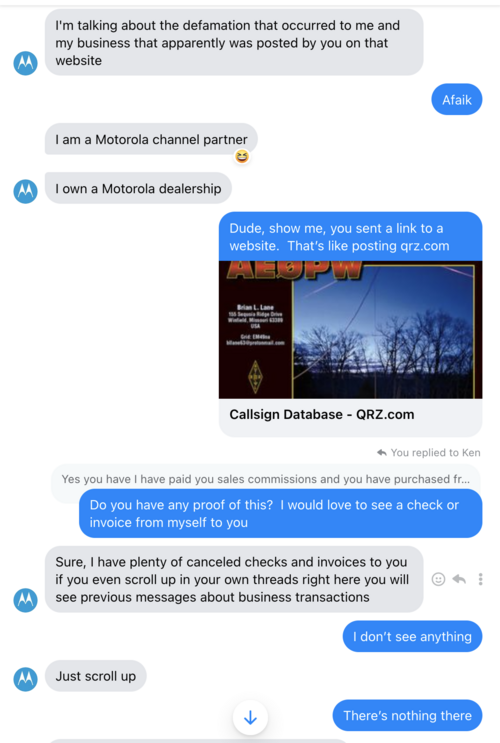 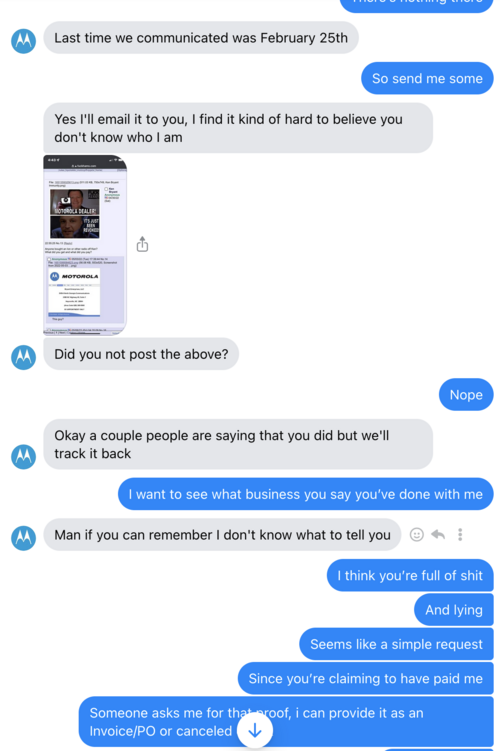 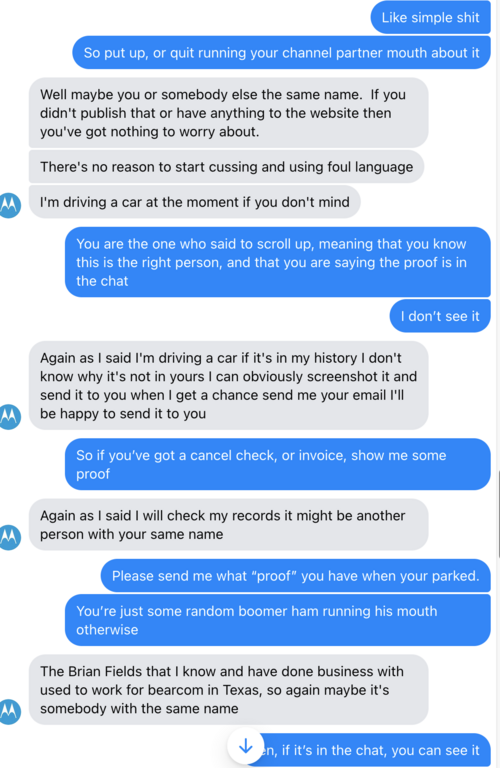 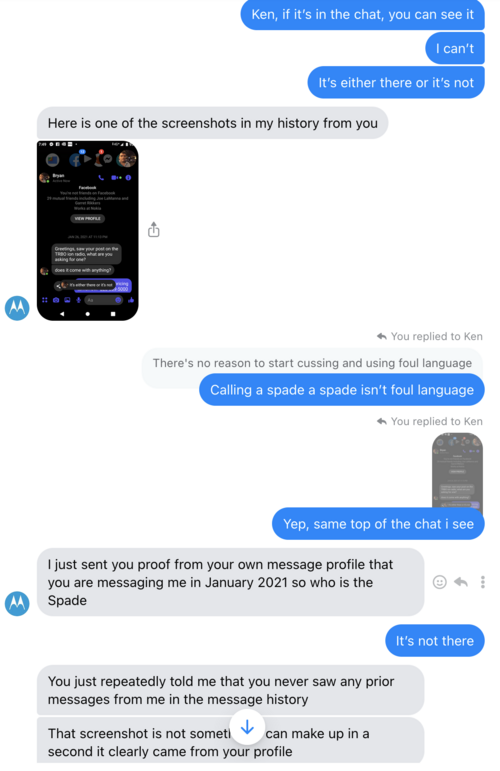 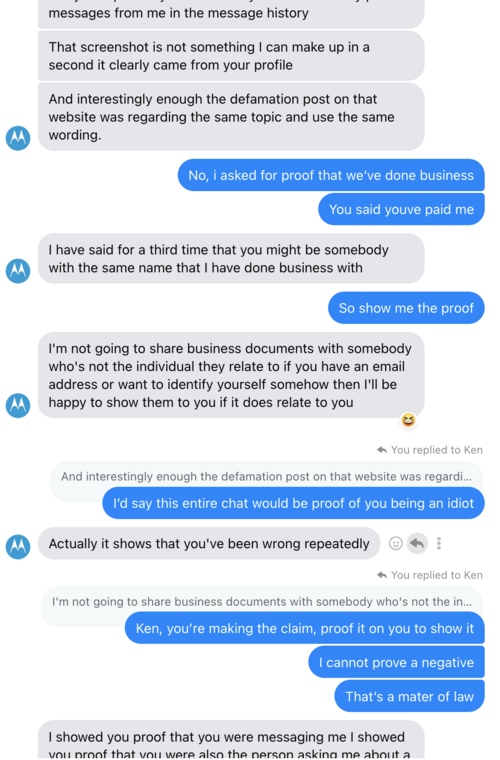 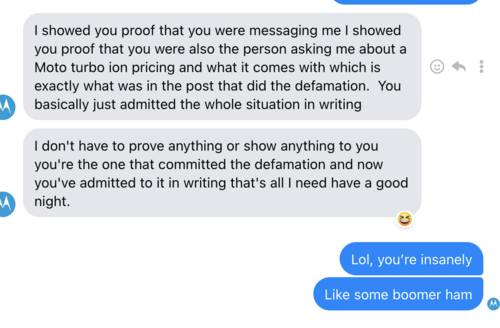 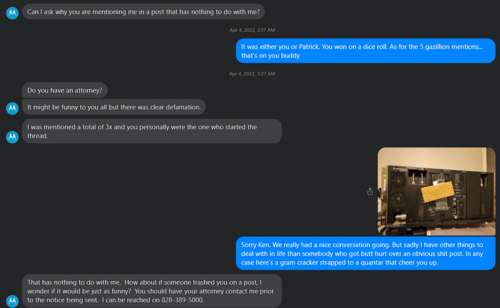 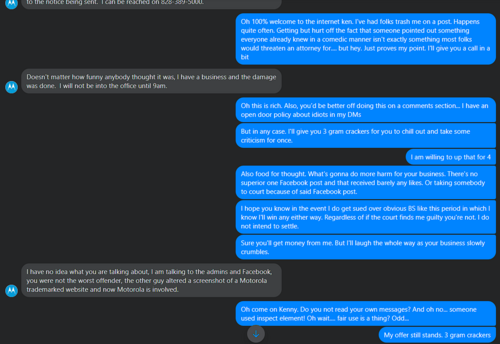 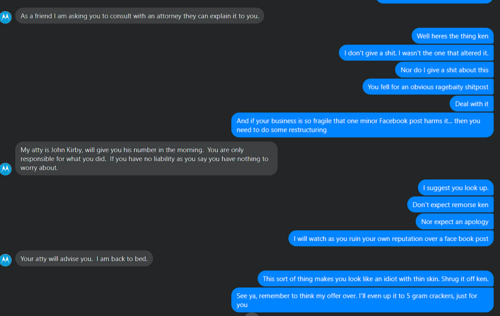 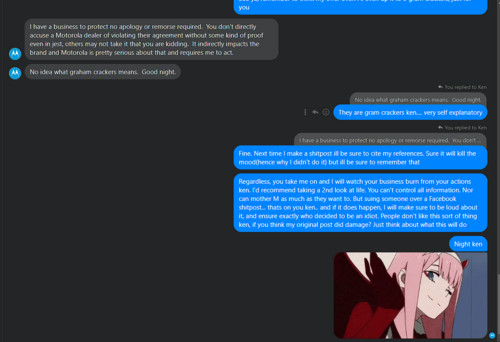 For context, this was in response to what we in the business call a "Shitpost" that could be found here where the only references the involved made to Ken were some quips about ken selling" "quality" radios", and "deserves the honest dealer of the year award"

Aparently he's a scummy realtor too.

After some other people reached out regarding disturbing comments regarding Ken Bryant, I did a bit of digging in his background. Ken claims to have several degrees, and multiple graduate level degrees as well on his QRZ page[1]. What's curious is the voice moving from first person to third and back again in this. I then saw his notice

"Presidential Staff member for planning and logistics to the White House Advance during the Reagan, Bush and Clinton Administrations"

The staff member during the Regan - Clinton administrations would mean he worked at some point from 1981-2001 for the white house for 14 years. I thought Ken was in his late 40's or early 50's, so this would mean he was very young, even if we take the last year of Regan (1989) to the first year of Clinton (1993) to be working in such a position. It's not impossible.

Update 2022-06-13, I reached out to the Sr. Program Coordinator of the Department of Criminology & Criminal Justice at FIU. He responded:

I just checked the transcripts of a few of my students who have graduated with their Masters in Criminal Justice degrees and their degrees are not posted with Latin Honors. Their Bachelors degrees are.

This means at minimum that Ken doesn't have Latin honors on his "masters degree" and perhaps lacks the degree all together.

The wording of this landed me to his link to http://amlcft.com/about/ which is a business he purported to run for anti-money laundering consulting. On this page, there were document numbers for name registrations with the Florida Dept. of State, aka sunbiz.org. G02107900163[2] found him to be using the name "K. Lawrence Bryant" circa 1999.

As Ken has stated he is "Former Federal Agent, U.S. Department of the Treasury" it's likely he will be in PACER. All federal agents will be giving testimony or writing other things that show up in the courts, and one would expect him to have done so. The only thing I would find was a criminal case 4-726-Cr-EATON. This seemed strange, but there was no info in PACER for this. We're lucky that at one time PACER was almost indexed by Aaron Swartz, and his archive has these important documents. I'd encourage you to read more about Aaron if you've never heard of him.

As it turns out, at age 20/21 Ken was impersonating a federal agent what would have been his junior or senior year of his under grad at FIU!

This is all starting to make sense. Why would a person who's an expert in anti-money laundering ask for hams to pay him in violation of PayPal and bank policies? 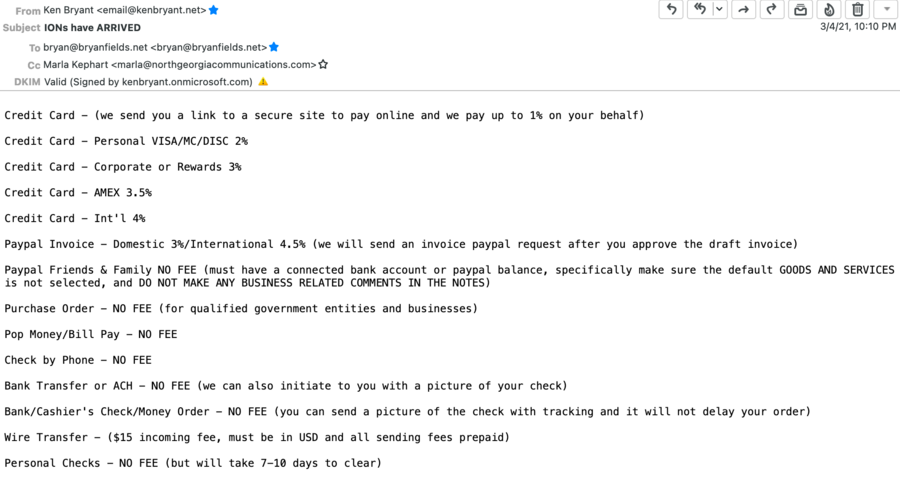 I was concerned this may not be him, but was able to look at his FCC call sign page in ULS, K1DMR. This referenced his old call, KF4CZB. Now ULS only goes to about 2002 or so, so into the historical QRZ from November 1995, which found his Miami address and Birthday. 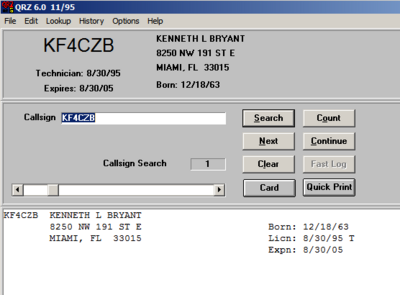 This DOB and Address matches filings he made pro-se in his criminal case. 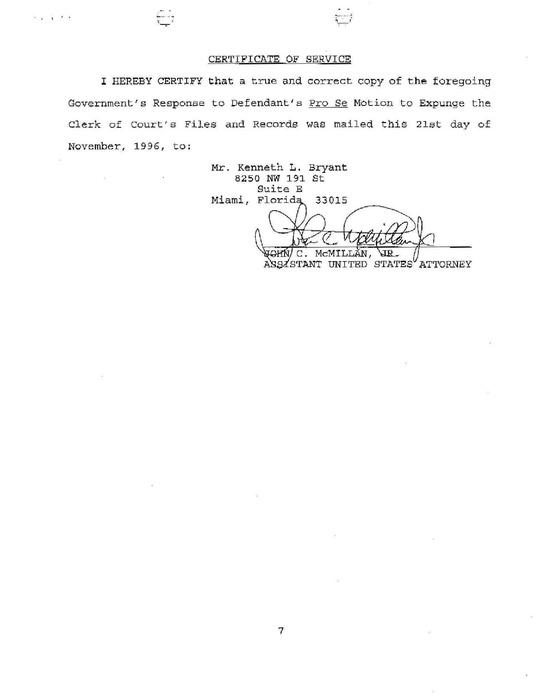 Now we know he was born in 1963, making him 18 when Regan was sworn in, which is a bit young for a White House advance team agent. In 1985 we can confirm he was on Federal Probation as a youthful offender, so this is not likely and he was not off probation until 1988. This would make his stated 14 years of service highly improbable. He stated in his filing to seal the court records in 1996 that he was unable to get a job as a federal law enforcement officer. This would make his claims even harder to believe.

Upon closer inspection, most of what he's listed on his resume is nothing more than volunteer positions. CERT, ARES Emergency Coordinator, U.S. Coast Guard Auxiliary, Emergency Management Institute, FCC License holder, etc. Some are simply hard to believe, such as his claim of being a Founding Member of the U.S. Department of Homeland Security. If anything I'd ask why a person with all these qualification, multiple graduate degrees, and business experience is working as a commercial two-way dealer; it doesn't add up.

I'd encourage everyone to review his federal conviction and case files. The finding of the psychiatrist who evaluated him was

"[Ken's] sense of reality might. be impaired and that [he] suffered from a possible psychosis."

has "a possible personality disorder and a fantasy life which is: "CLEARLY MORE ACTIVE THAN HIS SOCIAL LIFE."

Based on my limited interaction with him, I think he may in need of further help.