The CPU measured the battery voltage from MECH_SWB+ line. If it goes low, it begins an orderly shut down of the CPU and radio systems.

Upon MECH_SWB+ the SWB+ is turned on via Q400 going low through Q405 and summed via CR440 ultimately actuated by Q403, which has an RC time constant for about 300ms on it. This turns on the voltage regulators, boots the HC11 and it talks to the ASFIC telling the ASFIC to output logic into the CR440, and keeps the radio powered up after the RC time constant turns off Q403. This takes the switch out of the radio power until it's turned off. When it's turned off, the radio detects a low voltage on the MCU analog input used for the low_battery indicator. This allows the MCU to execute and orderly shutdown.

I powered the radio up on a 8.4v PSU and noticed it was drawing close to 300ma when powered on. This was found to be a shorted Zener diode VR449, causing heating on the 68 ohm resistor between SWB+ and ground. This made me think it was ESD damage or something. There was still a bit of current draw above normal after removing the shorted Zener which was shorted (176 ma now).

Further looking found the BOOT_CTL input zener was shorted VR450, and Q417 was shorted out. This actually seared my finger tip when I touched it. When this was fixed the current consumption went down to 90-100ma depending on the radio scanning.

At this point I had to remove the shields over the CPU and regulator circuits. This requires 525f gentle heat with a whole board heater to remove the shield. I use a small suction device to pull it straight off, as the parts under the circuit will be reflowed and move if the shield touches them.

I tested the clock battery charger circuits and found Q416 and U410 (a low power 3.3v regulator both tested working properly. 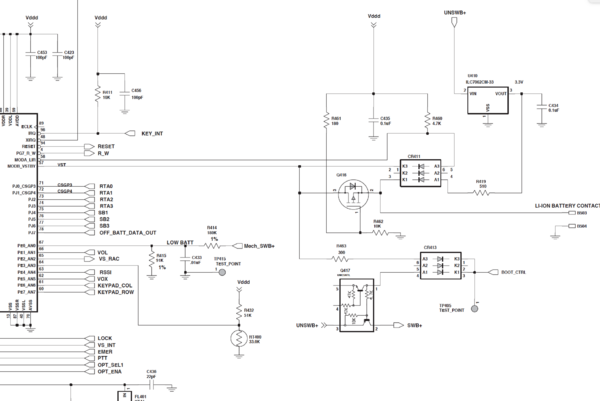 After all this, we had the radio no longer exhibiting any of the initial problems, but the current draw was still ~35 ma too high.

As this 35ma was 1/3 of a watt, it was almost impossible to find it via heating of the parts causing it. What needed to be done was figure out what bus it was drawing it from.

In the radio there are the following voltage buses:

There was no easy way to find the current draw on each of these busses, I replaced the R401 0 ohm with a 22 ohm chip. looking at the voltage drop on this, the calculated current draw was under 10ma (just powering the CPU and digital busses).

Q400 was removed and B+ was jumpered directly to the SWB+, isolating the UNSWB+. Current draw on the SWB+ was noted and found to be 50ma with the radio running. This means the additional current draw was on the UNSWB+. What was strange is the radio powered off didn't draw any current. This means the source was the UNSWB+, but a device in the radio had to be biased/turned on for it to conduct.

The audio PA was next, and then the boot control was tested. Neither was the source of the draw, this left the 3v regulator for the clock, which was tested good, it was making 3.3v and the only load was via a 510 ohm resistor limited draw to 6ma (3.3/510=.006), which didn't make sense that it could be it. U410 was lifted and setup to bypass the UNSWB+ source via an external PSU. This was found to be the source of it, the regulator was drawing just over 30ma at 8.4 v input. Q416 was found to be bad too, even though it was tested good, not shorted and still working to switch. What was the issue here was the FET was having leakage between the drain and the gate!

This was a total soft failure and couple with the initial problems made me suspect ESD. ESD can flash over the insulated gate[1], causing a little tube and the internal surfaces to get coated causing leakage across the gate, but still test good for resistance.

The current draw of the radio was checked and found to be 58ma @8.4v with the display led off and no signal received. The radio boots, initially draws about 120ma, then goes to 80, then the leds turn off and hits 64ma. Eventually it hits 58-59ma, and this tracks across the entire waris product line.

I found the ex600 radios are ideal to harvest parts from (other than the ptt/io switches which are different) as most of the parts covered by the shields in the HT1250 are on the keypad and only have a metal in the case as shielding. The parts are the same number across most of the waris family, and referencing the Motorola PN across multiple manuals can locate the same part, and sometimes even the manufacturers part number. Additionally cutting out just the diagrams/parts you need from one of the service manuals as a separate document can make searching easier. Rather than finding all parts across all variants of the radio (UHF/VHF/LB/etc) you can just search the 10 pages of the radio you're working on.

I've made a video of the repairs here.