This is a brief overview of firmware upgrades on the Astro Saber/XTS3000/Astro Spectra radios. As these are out of production since the early 2000's they are available on the used market for cheap. What is missing is how to update the firmware on many of them to support P25 Phase 1 voice and other features. Features were licensed on all these radios using a dongle or "iButton". On this dongle the CPS would check and then decrement the counter of the number of features or software upgrades permitted. As Motorola doesn't support these, the licenses are No Longer Aviable, and thus the hobbyist is unable to use them.

What's presented here is using a special version of CPS known as "Depot" which doesn't check the iButton to flash the firmware and then if necessary make a new codeplug with the features required for the radio.

NOTE: you must ensure your SRIB is a version D or later, as this has the larger SRAM chip that support the 1 meg radios. You may need to open it up to verify this.

READ THIS: The SRIB requires a 9v power supply Center Negative on the DC jack. If you fuck this up, it will fry the SRIB. This is reversed from all other RIB power supplies, and you must ensure you use the SRIB with a center negative supply.

Additionally you will need a DE9M to DE9F cable to connect the radio the PC and the full test/programming cable for the radio.

Install the Depot CPS, and ensure you do a custom install without the tutorials. You cannot have the regular CPS installed with the Depot CPS, so remove that first if you need to.

Install Unzip the firmware files and have them ready.

Open the CPS and test that you can read and write the radio codeplug, and the flashport config.

It's suggested you backup your radio with mototools in binary format and save the CPS codeplug too. This will allow you to recover it if needed.

Mototools is a program that can read and write the code plug in binary format directly to the radio.

You will go to depot and flash radio; this will bypass the iButton check.

Select the firmware CVN file for your radio, and then ensure the bootstrap code and SRIB software is selected. Normally these are setup by default ok. The SRIB runs it's own firmware and gets a firmware update every time it's run if needed. The bootstrap code is the small program pushed into the radio via xmodem when it's in bootstrap mode to talk to the SRIB and enable flashing the firmware. This Bootstrap mode is not a firmware function, but in the MC68HC11F1 MCU directly (ala Waris radios), and thus it may be possible to bootstrap a 100% dead corrupted firmware radio. The issue for the here is the CPU runs at 1.8432 MHz meaning the MCU bootstrap asynchronous data speed runs at 7200 bps (1843/.256 = 7200). As this is a non-standard speed for a computer, the SRIB reads the code out of it's memory and writes it to the MCU bootloader at 7200 BPS. 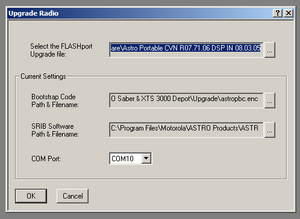 Now you will select the com port, and then run the upgrade. The CPS will interrogate the radio and SRIB for it's information and then put the radio in bootstrap mode by holding the BS line high. You will power it off and on. The only indication of it being in bootstrap mode will be the LED is solid green; there may be old data on the LCD, ignore it it's just what was in ram.

The CPS will flash the SRIB firmware if needed, then decrypt and copy the radio firmware to the SRIB. This will take 25-30 minutes, and the CPS my be stuck on "Block 5 of 8" and appear to be frozen. Do not dispare, it is running. 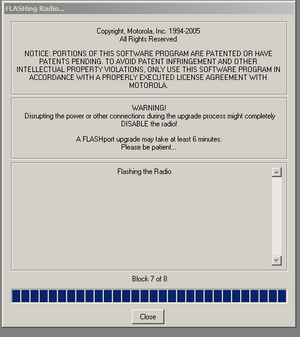 On subsuquint flashing operations of the same radio model/firmware the process will not need to update the SRIB or copy the firmware to the SRIB as the code will be on the SRIB's internal SRAM. The CPS will go to "Flashing the radio" "Block 7 of 8" almost immediately and take 5-6 minutes to flash the radio. Once it's complete your radio will need to be power cycled. 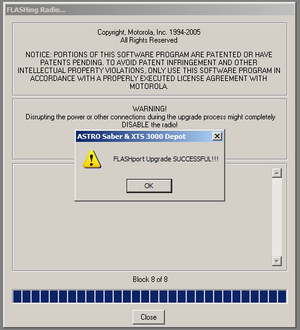 In the depot CPS you will need to make a new codeplug with a valid flash code for your radio.

You'll select your radio type and model and then put in the flashcode you want. it's case sensitive.

https://www.akardam.net/r/m/tools/fencode.pl has an encoder that will work, but note that you must have a selection that is valid for your radio. MODAT is not supported on mobiles you stupid whackers. 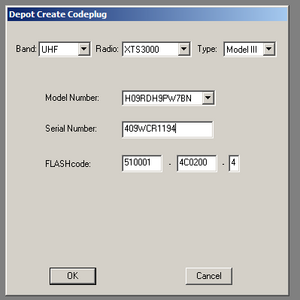 Once this is done, program it into the radio. It shouldn't need to be re-aligned if done right, but in any 20 year old radio, you should re-align it or at least check it, especially if it's not have p25 voice in it before.

Now read and write it normally with CPS and you're good to go.

If you have anything newer here, or other version/firmware please email me.

MotoTools1.3.0.0.zip - Mototools is a program that lets you read/write binary codeplugs to the ASTRO radios

Astro FDB Tool - This is a program that lets you manipulate the FDB and flash code of Astro radios. This is a neat program as it's almost written 100% in LUA script and easy to modify and reverse.