These are P25 trunking radios which are mono-band.

J2 is the accessory connector

Here's a picture of it from the radio side 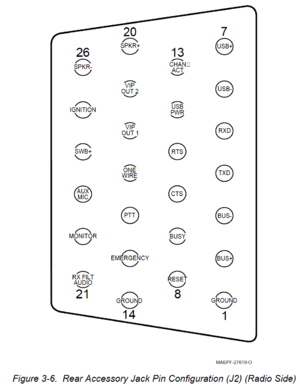 As of now, there is no other source for the connector than Motorola. The rumor mill puts money on ITT Canon being the manufacturer.

The housings are HLN6961

The body looks like 2 D-Sub connectors stacked with standard pitch spacing on the pins.

Aftermarket Pins will not work due to the low profile retaining ring. This thread on the Batlabs Batboard has some more info and this picture showing the differences below:

The Engineer PA-09 is recommenced as a crimper.

I disassembled and took some close up pictures with my scope. The connector looks a bit similar to most D-SUB connectors.

The 900 MHz radio has an option for the pre-amp, you want this enabled.

The other concern for 900 MHz was the preselector B7250, and it's the same device from the MCS2000. Motorola describes it as a 6 MHz wide unit centered on 938 MHz, and then another follow the pre-amp for an image filter. In testing with a tracking generator it was found roll-off didn't happen until about 915 MHz and 960 MHz. This should be (and is) a fine ham band receiver.

The programing info for modifying CPS to program the hamband is on the XTS 2500 page.