These have EMEA (Latin America/export) versions known as GP 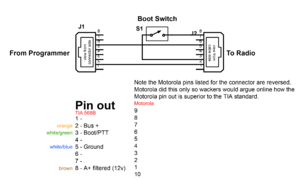 All this below is not needed. Check out using the UHF 450-527 Ham Band Mod for using waris.py and chirp.

Using Chirp is the way to do it and you can change everything. I typically set the signaling bits to FF enabling all signaling supported, but some radios may not work with this. Always read the radio and save the data before making changes. The data file format is the same binary on the radio EEPROM and use by cptool.

The basic issue with modifying these radios to cover down to 440 by only adjusting the High & [[#Low Frequency|Low] Frequency settings in the feature region of the codeplug is the tuning for deviation/squelch/signaling/etc. is setup on 7 frequencies. When the radio tunes between two of these frequencies the value is interpolated based on the curve of the tuning values. For example deviation response will vary from 450 to 520 MHz, the same voltage at 450 will be an unacceptable amount of deviation at 520.

As the frequency "piers" only go down to 450 MHz, the radio has nothing to interpolate with if it's programed 440.450 MHz. This causes this interpolate calibration code to fail and deviation and other calibrations are all over the place. Luckily this is a rather easy fix.

There is a new way to do this using chirp and the plugin below:

Using this procedure on a number of EX600xls radios has worked well, but some don't seam to work down at 440 on receive. I've found this to be due to the preselector alignment. Once this is re-aligned on the new frequencies in global tuner, the radios receive properly.

Since you have to load global tuner up anyways, it's worth checking the refference frequency oscillator warp. While not off much, the batch I've seen have been off 600-1000 Hz.

Not sure what this does, but I encountered a UHF R1 HT model H25RDH9DP5, that was 0xCC78 and it would not load the codeplug from a H25RDH9DP9 HT with everything in the FDB being the same other than the source CP was 0xCE79.

I tried changing each byte independently and CPS still would not allow the CP to be written to the HT. Only with both flipped to the proper 0xCE79 of the source radio would CPS write the unit.

Any more information would be helpful