I've changed out some filters and found it works much better on the ham bands. You need to adjust the squelch for 25khz channels after doing this. The tuner software (2.00.02) will do this for the HT1250 only, it will not work with the mobiles. Use $program to access the greyed out menus in tuner.

The 1st IF is under the shield, and very hard to remove. I've not messed with it, as it appears to be the same part in the UHF, and doesn't look like it's limiting. 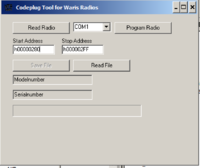